Assassin’s Creed III- A Tale of the True Hero of the American Revolution… Apparently.

It has taken me a long time to actually finish Assassin’s Creed III. In fact I had bought it soon after its release on the Xbox 360 back in 2012. It took me until 2018 to complete it. To say I struggled with this game would be an understatement. I tried to like it, I tried. However, I’m going to put it out there, I absolutely dislike this game.

Let’s start with the story. AC3 takes place during the American Revolution, with the historical assassin being Connor, a Native American, trying to protect his village from the Templars because it protects a sacred site. There is also a secondary plot which involves Connor seeking revenge for his mother’s death. An assassin avenging a death of a loved one killed by a Templar… haven’t seen that one in the series before. The plot had potential but it became pretty tedious as rather than focus on Connor’s story, the story seemed desperate to fit every single historical battle and come up with an excuse for Connor to be present. According to Assassin’s Creed 3, Connor is the reason why the Patriots won the war. 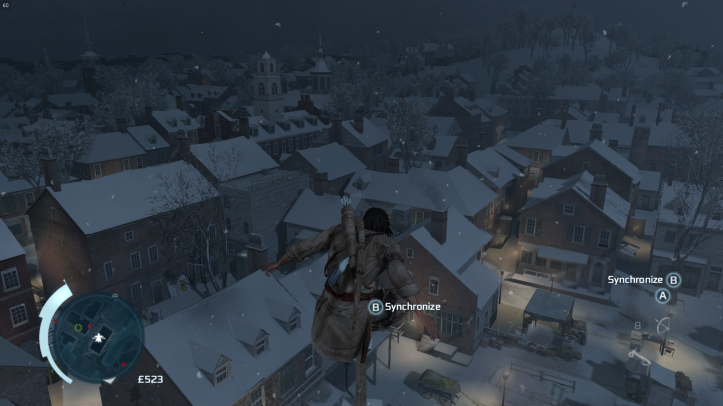 In fact, I was more intrigued by the potential that the estranged father/son relationship had on the storyline but apart from offering Connor an opportunity to argue with someone else, it didn’t affect the plot. Considering that I found Hatham more interesting than his son, I felt that this was a missed opportunity. In my opinion, the story should have revolved around Connor’s desire for revenge, while wrestling with the concept that his father is a Templar. This would have been a more emotional and personal story, instead of telling how Connor saved America.

For the first time in the series, I found the modern day storyline to be more interesting the past plot. In the 21st century, Desmond and co are in a race against time to save the world from an impending apocalyptic event. I know, a bit cliche for 2012 but then everyone seemed a little obsessed with the world ending. It was interesting to finally be an assassin in the 21st century but the modern day storyline seemed to suffer from pacing issues as it was clear that the developers really wanted to focus on the 18th century plot, which would have been OK, if this wasn’t the final chapter of Desmond’s story and if Connoer’s story was more interesting.

OK, I’ve put it off long enough, I really dislike Connor. He is argumentative, obnoxious and arrogant. Seriously, there is not a single character he does not argue with. He even makes whiny Desmond more of an appealing character! Don’t get me wrong, there is anything wrong with an arrogant character, I mean Altair was incredibly arrogant but over the course of Assassin’s Creed, Altair evolves and develops, whereas Connor does not. This prevents me from being emotionally invested in Connor’s journey and quite frankly, I actually started to root for the antagonists.

I feel that the story also had an impact on the supporting characters in a negative way. As with all Assassin’s Creed games, in AC3, you get to spend time with the likes of George Washington, Benjamin Franklin and Samuel Adams, one of the few characters in the game I liked. However thanks to the story, these historical figures are portrayed as helpless, without the help of Connor and in some cases, like George Washington, completely inept at their job. This leads me to agreeing with what the Templars are saying, that they should be in charge because the other Patriots are incapable. Something is going wrong if players are agreeing with the people they are supposed to be stopping. 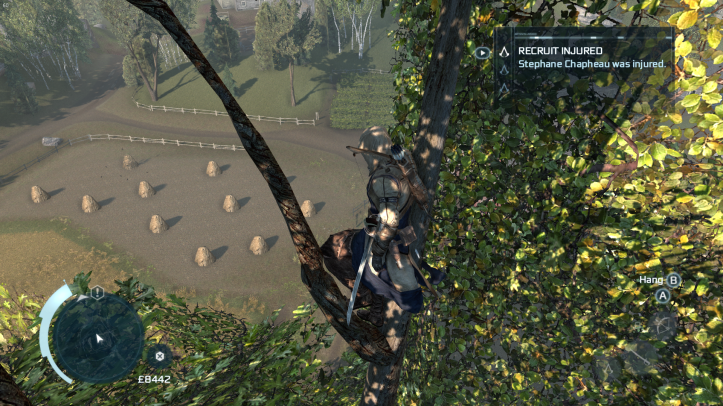 Now, its not all negative. I love how big Assassin’s Creed III is. You get to explore Boston and New York, but the best area is the frontier, which feels huge and benefits from the improvements made to the free running in the game. Now, the assassins can climb and run through the treetops and scale cliffs, making travelling through the world feel fluid and more realistic. However, in AC3, I found that the game was really unforgiving in allowing to free run across the rooftops in Boston and New York. Pretty much as soon as you put on foot on the roof, a guard will notice you. This becomes rather irritating and restricts you ability to be more stealthy, which sort of goes against the whole assassin thing.

Like with the other Assassin Creed games, there are plenty of side activities to undertake. The map is littered with Captain Kidd’s treasure and side quests. However, for some reason, even if you use the synchronisation spots the map doesn’t reveal everything. Instead, you also have to purchase maps to show the location of some items.There is also an economy system, which seems more like a filler activity; which in all honesty a lot of the side activities feel like. There is one new activity that didn’t really go down well, the naval missions. In Assassin;s Creed III, you can now engage in naval combat, which sounds great on paper but the actual experience is awful. The controls are clunky and you have to spend a lot of money making your ship effective. The experience is just tedious and not enjoyable. 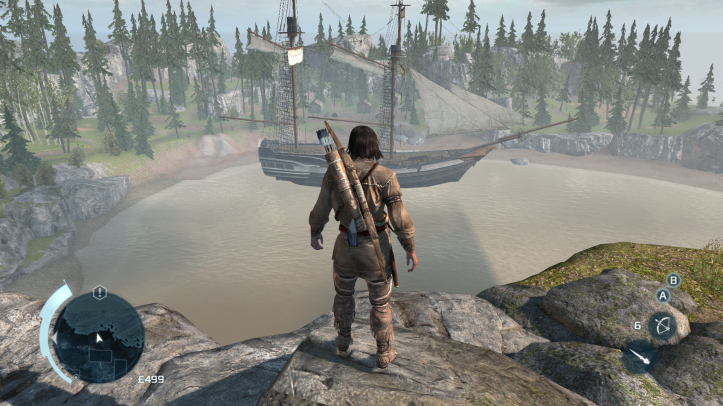 So, overall, I struggled with Assassin’s Creed III. The story is just an excuse to show off historical battles, that weren’t even exciting. The characters were dull or great examples of particular tropes, which meant I wasn’t invested in most of their arcs. The setting is beautiful and the improvements to the free running encourages you to travel more in the various environments. But the game just feels like a chore with no reward for the effort that you put in. I would suggest you only play this game if you are a die hard Assassin’s Creed fan or you want to see the conclusion of Desmond’s story. If you’re new to the franchise, start with any of the other games.

Now, if you’ll excuse me, I have a frontier to explore.

The featured image came from the Assassin’s Creed wikia. All of the screenshots were taken by myself.