Assassin’s Creed: Brotherhood- Rome Wasn’t Completed In A Day And Neither Was This Game…

The third game in the Assassin’s Creed series and already the series has seen some ups and downs. With the success of Assassin’s Creed II, Ubisioft decided to continue Ezio’s story, but will this turn out to be a wise move?

Playing Assassin’s Creed: Brotherhood has left me with some conflicted emotions; part of me loves some of the new gameplay, while another part wonders how a game about secret societies seem so… dull. Let’s start at the beginning and see if we can’t work through some of my thoughts on this conflicted game.

Brotherhood picks up right where ACII left off, Ezio has taken down the Templars in Italy and manages to escape Rome. The Assassin Brotherhood’s victory is short lived with the destruction of Monteriggoni at the hands of the Borgia, a Templar family to whom the Spaniard (antagonist of the previous game belongs to). Ezio escapes and swears revenge. Does this sound familiar to anyone? If the answer is yes, then you’re not alone. To me, this sounds awfully similar to the premise of Assassin’s Creed II. In fact, much of the same plot points appear in Brotherhood as its predecessor: travel to a city oppressed by the Templars; meet up with local factions; help said factions with their troubles and in return they help Ezio in assassinating the Templars. I’ll be honest there wasn’t any real plot twists that took me by surprise and I actually found Ezio’s final assassination rather anti-climatic. Don’t think that the modern day part of the game makes up for the historic part; the modern day plot sort of bookends the whole story and at times I felt I was missing something as that part of the story seemed to leap all over the place. 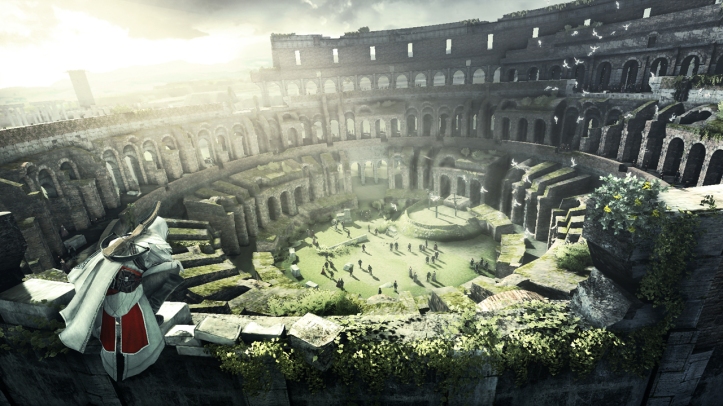 The repetitive plot isn’t the only reason I feel that game dragged, as  a whole. For the first in an Assassin’s Creed  game, the entire game is set in one city, Rome to be precise. Even in the original Assassin’s Creed, each city had its own architecture and atmosphere, adding to game’s overall setting and allowing the player to feel like they are making progress. At the very least, it changed the scenery. Unfortunately, in Brotherhood that isn’t the case. Sure, there are some minor differences between the districts but nothing compared to Venice and Firenze in ACII or Acre and Jerusalem in Assassin’s Creed. The other thing I noticed whilst playing Brotherhood, the visuals haven’t evolved much from Assassin’s Creed II. I suspect this is down to much shorter development time that Brotherhood has and personally that isn’t too much of a big deal but it does make me wonder if more time had been spent on Rome’s appearance, would that have helped with monotonous setting? 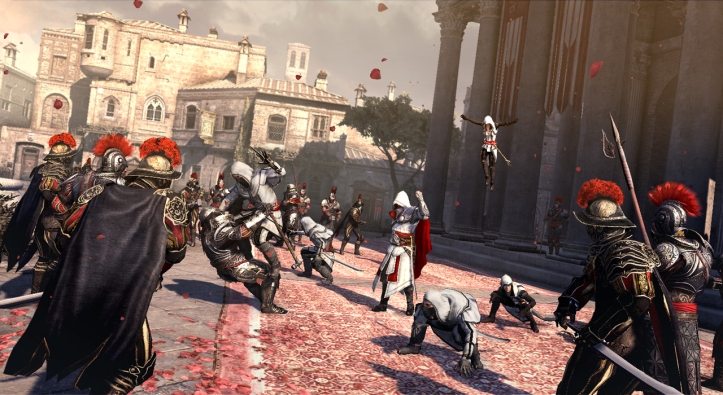 I know it sounds like I’m complaining a lot, but there were parts of the game that I did enjoy, in particular one of the new mechanics, calling on your fellow Assassins. This arguably the selling point of Brotherhood. In the game, Ezio decides in order to liberate Rome, he must restore the Assassin Brotherhood to its former glory. For the player that means rescuing civilians and recruiting them. There is a new mini game, in which you send your assassins on missions to level them up and thus improve their skills. I will say, I did feel pretty cool walking towards some Templars and getting my assassins to take them all out with arrows. I wished that the developers had made the levelling up system a little more complex, as once your assassins reach the maximum level, they all end up with the same weapons and armour. It would have been nice if you were able to personalise your assassins, making them feel like they were truly your assassins.

A few of the features from ACII make a return, including the faction side missions, assassin tombs to explore and collecting feathers. Unfortunately, the flags have made a return. I’m not rue who said to Ubisoft that players loved collecting flags in the first game but someone must have said it! On the plus side, you can now purchase maps from artists which reveal where the collectables are. There is another set of unlockable armour to unlock, this by collecting scrolls rather than seals. Whilst I love these new assassin’s tombs; the optional objectives, such as complete them in a certain time limit, does spoil them slightly. Another returning feature is upgrading a settlement to earn additional money. Unfortunately for players, this settlement isn’t the size of Monteriggoni. Oh no, this time you have to upgrade the entirety of Rome. And let me tell you, that takes an incredibly long time to do. 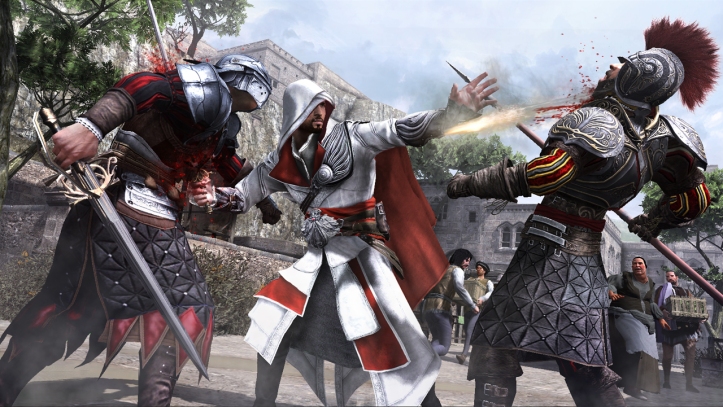 Another aspect that has been vastly improved is the combat. Now you can chain your kills, creating execution streaks. This makes the combat feel more fluid and less waiting for the enemy to strike so you can hit counter. This may seem like a small difference but it manages to speed up the game. Unfortunately, it seems like the developer didn’t want players to complete the game too quickly as they added an new feature:optional objectives. In previous Assassin’s Creed  games, to 100% complete a Memory Sequence, you just had to complete the sequence objective. In Assassin’s Creed: Brotherhood, if you want to reach 100% completion, you must also complete the optional objective which is usually along the lines of, use a particular weapon or do not get spotted. Not only does this lengthen the game but it also reduces your ability to complete the objectives the way you want to do it. For me, the optional objectives feel like padding to game, which would have a far shorter play time without it.

Overall, I love and loathe Assassin’s Creed: Brotherhood. It is clear that Ubisoft was capitalising on the success of the second game and on the popularity of Ezio. Don’t get me wrong, as a fan a Ezio, I love the fact I get to spend another game with him. However, Brotherhood just feels rushed and repetitive. I don’t believe enough time was given to the plot and so, in order to pad out the game time, the developers overloaded the game with side activities and optional objectives. Like with Assassin’s Creed, I would have rather had a shorter game than one I had to occasionally force myself to continue playing. If you are a die hard fan of the Assassin’s Creed series or of Ezio, then I suggest you play Brotherhood, but be prepared for the hard slog. For anyone else, this is not the best game in the series and only really play it if you want to understand the modern day plot, which does have a serious development at the end of the game.

Now, if you’ll excuse, I have some optional objectives to reattempt…