This article is part of a series. The first part can be found here : Free To Play Array, Part 01 – AdVenture Capitalist

Card Hunter is another game available via Steam and mobile devices. It is also available on Kongregate, from what I have heard.
With further research, it appears a remaster has been released on iOS under the name Loot & Legends. Information on this is a little vague, but it appears to be a revised, updated version of the game, despite the fact Card Hunter is receiving support anyway…? This review is JUST based on Card Hunter and won’t feature anymore references to Loot & Legends.

Card Hunter is a tactical card game, fusing elements of collectible card games [CCGs] and role playing games such as Dungeons & Dragons [DnD]. In fact, it wears it’s DnD influences on it’s sleeves and is pretty proud of them.

The game sees you as a player at a role playing session with a trainee game master [GM], called Gary, playing a game of Card Hunter. Right off the bat, you can see the game has a sense of humour by the fact you are playing a game about playing a game. How meta.
You are thrown into an encounter with a three person party and introduced the rules, which we shall get to shortly. Upon completing the encounter, your session is interrupted by Gary’s brother, Melvin, a far superior GM. He scalds you for using his party’s characters and makes you start afresh; a new campaign to level through. It is a nice little concept and works well as a means to extra humour and plot twists. 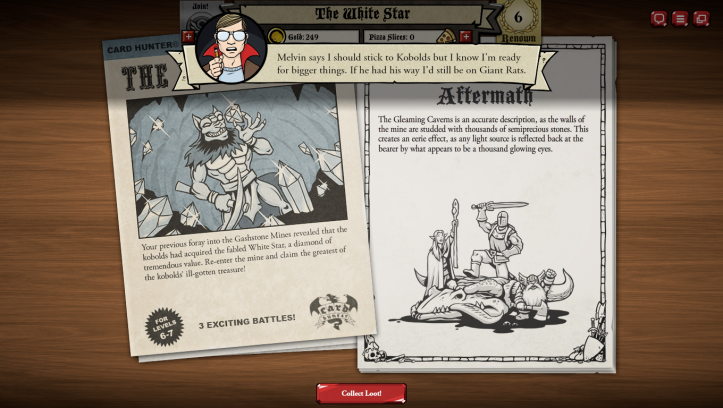 The game itself is quite engaging too. You control a three-person party and run encounters in the land of Cardhuntia. Each character has some starting equipment which has a number of cards associated with it. You use these cards to move your characters about the board and perform actions, such as making melee attacks or casting spells. This creates a nice balance between deck building and tactical combat.
The tactical side of the game is fairly traditional of “tactics” games. You have a grid-based board with the area of play marked out on it; walls block line of sight, rough terrain ends movement prematurely and melee has to be performed from adjacent squares. It is simple to pick up and is easy to interpret at a glance. 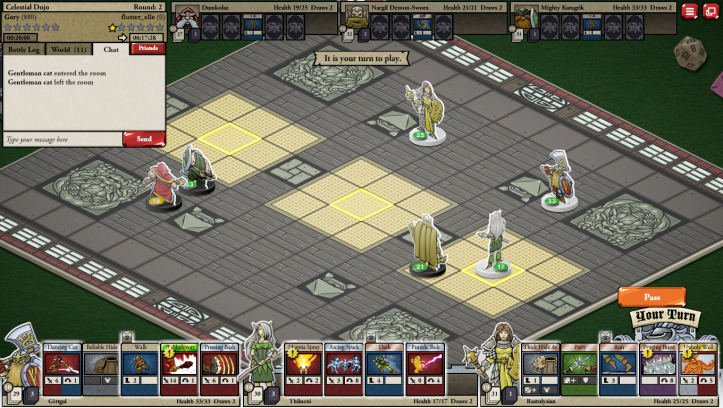 The playing of cards is simple too. Each round begins with all the characters drawing a hand of cards and then plays out with each player playing one card at a time. Once each player has run out of cards to play, or wants to play, then the round ends and a new hand of cards is drawn.
Some cards, mainly armour and defences require dice rolls to be successful. The game keeps things moving by performing all the rolls as they are required and modifies them immediately. Sometimes, I felt it was almost running too quickly and I couldn’t always catch what was going on, but the game keeps a play log in the top-left corner, so you can always check back over previous plays or reactions.

To win an encounter, you have a number of points to score. The easiest and most common way to score points is by killing enemies, though some quests have special areas to control. If you control the majority of the special spaces at the end of the turn, you score a bonus point.

The real complexity of the game comes from the deck-building aspect. As mentioned earlier, the equipment you give each character has a set of cards associated with it. Say your warrior has a sword, a shield and armour, each of those items may offer 5 cards each and create a 15 card deck for you to play with. As characters level up, they unlock more equipment slots, increasing the size of your deck, which makes your character a little more inefficient. But as you complete quests, you earn new equipment, which have better cards associated with them, to tailor your character and keep your deck cunningly consistently. Each characters class and race also add a small number of cards to their deck too, so it can be worth checking the Tavern for new characters every so often.

This is where I feel Card Hunter really makes itself stand out from other digital card games. You need to get a balance of attack, defence, utility and movement cards to ensure you have a range of options available, each round. As your characters continue to level, they start gaining specialist slots for talents and racial bonuses. These help to specialise your characters even further and grant them special _ cards, which apply long term effects, and powerful items which can give lots of powerful cards alongside a couple of penalty cards to litter your deck. 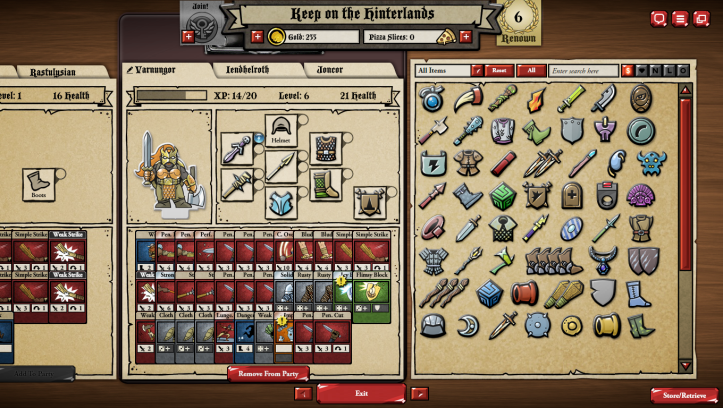 As you complete quests, you gain renown which is the game’s way of controlling your progress. New quests and stores are unlocked each level of renown and give you access to special card types, or seasonal character designs. It is simple but effective at monitoring progress, though I often found I couldn’t afford the gear I wanted at the time because I didn’t have enough money from the quests I had completed and the game locks the ability to sell useless gear until you have a certain amount of renown. Why? I’m not sure…

The game has a really nice aesthetic; it fully embraces the idea of being a board game session. The board is a sheet of paper spread on the table, while the characters are cardstock in plastic standees. Gary talks about inane topics between encounters to give background on the “real” world while remembering to get back in character for the next line of dialogue.
The sound design is simple, but effective. Depending on your particular encounter, you may hear the soft whinnying of ponies or the dripping of sewer pipes, which are accompanied by the sound of plastic characters being moved about the board and the rolling of dice. The game balances nicely between the fantasy tropes and the game session tropes, keeping the humour light-hearted and accessible. 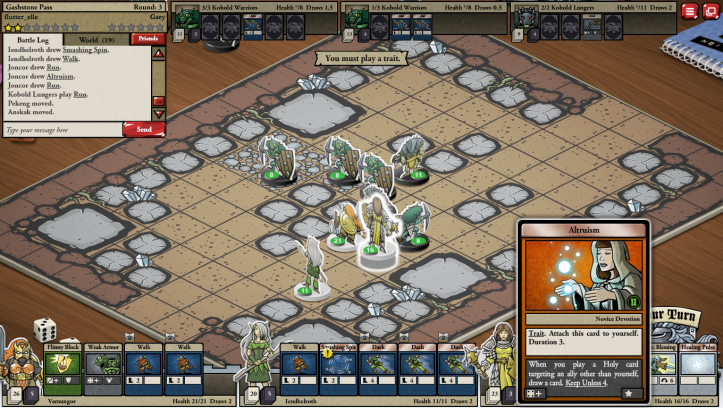 The game features a premium currency in the form of Pizza. Pizza gives you access to extra campaigns, alternate character standees and bonus loot, if you join the Card Hunter Club. The tutorial gives you access to some pizza and nudges you towards spending it on the relevant topic, at the time. You don’t have to spend it, but they don’t really give you enough to purchase any alternatives.

From the sessions I have played, I haven’t any Pizza through play; only when the game presents it to me. The prices for buying it are just large enough to turn me away from buying and I find their Pizza Club unappealing. The idea of the club is that you pay an amount of Pizza to join the club for a pre-determined amount of time; 80 Pizza for 7 days membership.
By being a member of the club, you earn an extra piece of loot in every encounter which will be an equal rarity, or higher than the rarest piece of loot you would receive anyway. It is a very good incentive to join but, whether you are in the club or not, you always get to see the special piece of loot. It annoys me due to the fact that if you decide you want to join the club for a piece of amazing loot, you have to leave it behind, to get to the menu to sign up. That is just poor design, in my opinion.

Card Hunter also has a multiplayer component. It takes the form of arena combat with a few control points to keep the game moving. To keep everyone on a balanced level, all players start with characters at maximum level. This means only the equipment you earn affects your play style. It is a nice idea, but I found the games a little slow for my taste.

Card Hunter certainly stands up as a unique game, in my opinion. It has a lot of depth for people who want to keep it as a free-to-play affair. I have heard criticism that there comes a point where you have to start using the premium currency to continue, but I have put in several hours and haven’t found that stage yet. The multiplayer may cause you to hit that wall quicker and shorten the game’s longevity, but I can’t say for sure.
As far as multiplayer games are concerned, Hearthstone is my outlet and Card Hunter will purely be treated as a single player experience, for me.

If you have an interest in tactics games or CCGs, I think Card Hunter is worth a look. It offers some unique twists on the traditions of both archetypes and dresses them in a fun veneer. But you probably shouldn’t try to steal the GMs pizza; it looks like they paid WAY too much for it…

Ellen screenshot-ed all of these photos herself and is happy to depict the work of Blue Manchu. The game is pretty enjoyable to play and Ellen is happy to speak favourably about this game. =]
Last played and still being played on 01/04/15 for Steam.
Don’t forget that you can keep up with Upon Completion via the Facebook Page at: https://www.facebook.com/uponcompletion/