Despite having a large number of games in my Steam library, sometimes I just want a simple game which I can play and not think too much. Sure, there are plenty of casual games which usually take the form of a mobile port, but I recently explored Steam’s “Free To Play” store and found a few games I felt were worth a look at; hence this article.
Regular readers will know I recently wrote a Sentence Review for AdVenture Capitalist, but since I play it daily, I thought it might be worth a little more time in the spotlight. 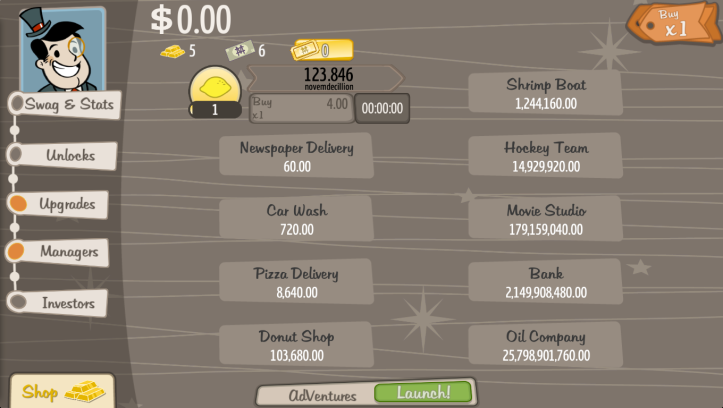 AdVenture Capitalist puts you in the role of a young entrepreneur starting at the bottom of the business ladder. You have a single lemonade stand and retail a glass for $1. Each time you click, you make another sale and can sell again, once the cooldown bar resets. As you raise money, you can buy more lemonade stands, which increase your revenue per click.
Once you raise enough money, you can expand your venture into more businesses, such as newspaper delivery, pizza delivery and car washes, all the way up to banks and oil fields.
If you want a break from clicking, you can also hire managers, who will click your businesses for you as well as investing money into upgrades which triple the profits of the relevant business, each purchase. 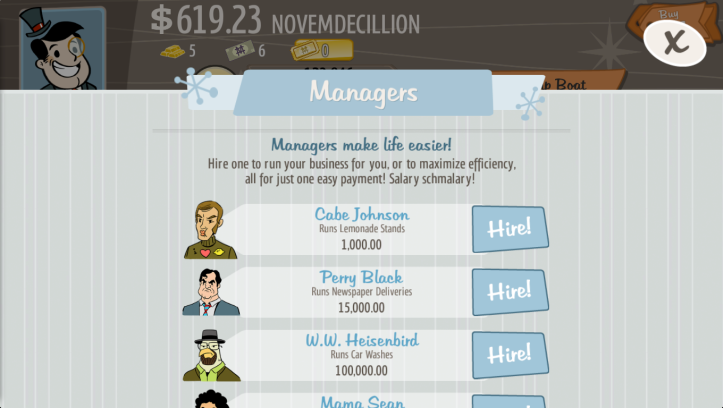 Most clicker games peak out at a point and feature a reset mechanic which allows you to start afresh, with a bonus earn from your previous progress. AdVenture Capitalist’s reset mechanic is “angel investors;” though the take the form of literal angels. 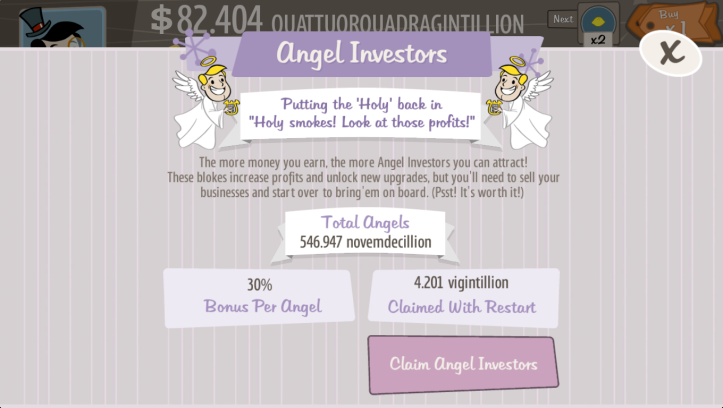 Based on your overall investments, you generate a number of angel investors who will follow you to your next business venture. These angels each give you a 3% bonus to your profits, but they also act as  currency to buy more upgrades and more business managers, with special effects. 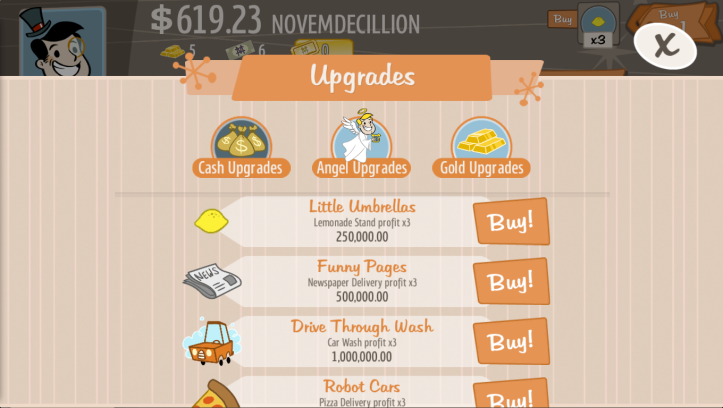 Now, obviously there will come a point when you have “too much” money, but AdVenture Capitalist has you covered. You can now finance expeditions into space and set up businesses on the Moon and Mars. The alternate planets continue in a similar vein to Earth, but with different currencies and items to sell.
Mars also includes an additional bonus system called “Profit Martians.” This is a special multiplier you can apply to all your business for 30 seconds, though you can extend the duration by clicking on the attached button. It is a nice little variant, but I found it a little tedious after a short while; I felt it was more a reason to keep you on Mars, rather than jumping between planets and boosting all businesses.

The game does feature a premium currency, in the form of Gold Bars. You can spend real money to buy Gold which can be used for massive bonuses or special upgrades, including a Gold Suit for your avatar. Even though the currencies are there, you have no pressure to actually buy them, which is always a nice bonus.

The team at Hyper Hippo have been adding seasonal events to the game, over the past few months. They are currently running the Christmas event which has been the most successful so far, in my opinion. As you progress through the ranks of money, you unlock verses of a christmas carol about being a capitalist.
The fundamentals are the same as the main game, but the added “story” element provides a quaint bonus to the gameplay.
This was very refreshing after the logistical mess of the “Black & Blue Friday” event which was kinda nonsensical; though that may have been the point, on reflection. 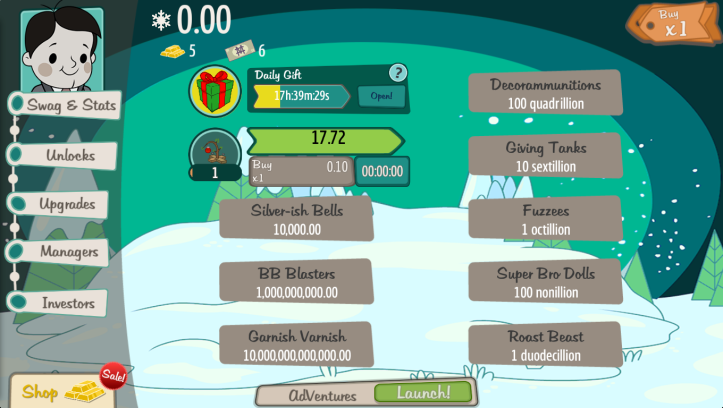 One of my favourite little features is actually the little “Stats & Swag” window. As you move into the next threshold of money, your title improves [Millionaire, Trillionaire, Nonillionaire ] as well as the little character and their assets.
It is a nice little addition to the game, to enhance the feeling of progression, but it does also present one of my little gripes. Mainly, the character is male, and can only be male. I don’t really see why you couldn’t easily have a female version, for us ladies. Surely it would only be a small amount of code and maybe one new visual component, as all the assets are layered behind the character. 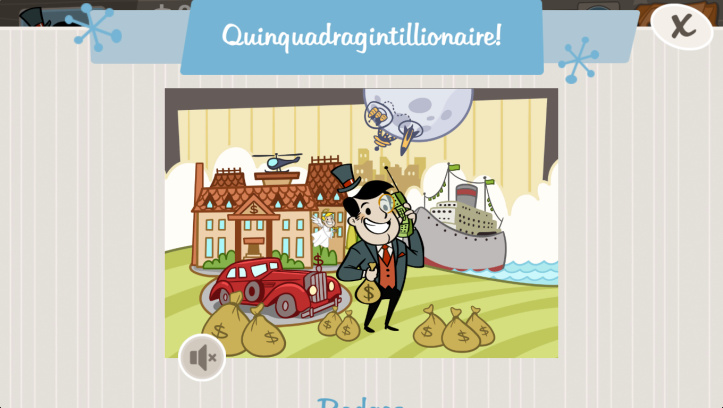 All things considered, I think these is quite a fun little diversion and I enjoy dropping in on it, every day.

AdVenture Capitalist is available on mobile devices, as well as the Steam “Free-To-Play” Store.

Ellen caught all these images herself, depicting the work of Hyper Hippo!
Last played and still being played on 24/12/15 for Steam.
Don’t forget that you can keep up with Upon Completion via the Facebook Page at: https://www.facebook.com/uponcompletion/