Horror Hammer : The Cabin In The Woods

Welcome to the first instalment of Horror Hammer. Within this section of the blog, I plan on reviewing the horror films that I will inevitably be watching between games.
I don’t assume to be anything special with regards to films, but I do know what I like; don’t we all?!

Anyway,
Last week, I went to see an old friend. Between our discussions of Anime, Video Games and books, we got onto the subject of films. Horror films became the topic of discussion after a brief interlude discussing Bob Chipman’s Schlocktober. This continued onto some of our favourite films and my friend stated his adoration of The Cabin In The Woods. Upon telling him that I hadn’t seen it, his mouth hit the floor and I found a copy of the film whirling through the air, speeding towards me.
After getting home, I left it on the side for a couple of days…
“Surely it isn’t going to be *that* good…” I thought to myself. How wrong I was…?

It is kinda hard to write about this film without spoilers, so I am gonna state it now…
I WILL BE SPOILING THIS FILM. IF YOU WANT TO ENJOY IT AS INTENDED, STOP READING NOW!
Genuinely, if you want to watch this film, go and watch it. It is absolutely fantastic!

“Five friends go to a remote cabin in the woods. Bad things happen. If you think you know this story, think again.”

That is the blurb on the DVD case. It is then followed by a number of actors and writers, including Joss Whedon. [For all you fanboys and fangirls!]

I threw the disc into my Xbox and started up the film. After a number of trailers, the DVD menu comes up. As much as I like interactive menus that are in keeping with the film, having one that directly links to the twist of the whole film, was a little disheartening. I appreciate that the company probably think tat you won’t be buying the DVD, if you haven’t already seen the film, but that isn’t always the case. I can recall buying Sinister and the box art gave away the whole third act of the film! When I lend that film to people, I give them the disc in a card sleeve, just to retain some of the mystery.

I’m too kind, I know! Or maybe just a little over precious with the cinema experience!

The menu is a large, multi-screened computer terminal… Intrigued by it’s relevance? I got an idea of where this was heading, immediately…

Regardless, I set the film in motion. Fortunately, I was very surprised to find that the film opens in a some sort of laboratory/testing facility with a pair of scientists engaged in water-cooler banter. You get some conversation about inane chit chat before a couple of seeds are sown regarding “a big test,””some subjects” and “the importance of tonight’s experiment.”
Just as you are starting to get into this expositio… BAM! SAM RAIMI TITLE SCREEN JUMP SCARE!

“Classic,” I chortle to myself as I wiped poop from my previously clean pants…

Anyway, this is where the films starts throwing tropes our way. Ragtag group of teens featuring a range of characteristics and visuals. They all discuss the merits and downfalls of university-based backstory before heading out to a house in the country.
All fair game.
Then, as they are driving off down the road, a mysterious figure on the roof radios in about birds leaving the nest. All very cryptic, but you should start to realise that this is far from a conventional, teen-horror film.

The story progresses and the students meet a peculiar petrol-station owner who tells the students that their journey will end in tragedy. This guy is dismissed as a loon and they reach the country house… The Cabin In The Woods that the title alludes to. Obviously, no-one in their right mind would stay there, but this is a film so that is all ignored. As the students are discovering some weird features of the house, the scientists are discussing bets and pheromone levels in the house. this is where you first realise that the scientists are controlling the student’s fate… Trippy, huh?

More student shenanigans unfold as the cast decide that getting drunk will pay off. Whether this is student protocol or induced by pheromones released by the scientists is up to you. I think it is likely half and half. =P
Things continue and everyone ends up in the cellar. This is where things start to get going, full stride. The room is decorated with ornaments of all sizes, shapes and origins…
Meanwhile, the scientists are taking bets on different monsters…
Everything comes to a head and a diary featuring torture methods and ancient writings is picked up.

From this point, the students each meet their own demise in cliched means, with a couple of minor details changed. My favourite design choice was easily a broken bear-trap on the end of a chain, used to catch fleeing students and drag them back, kicking and screaming. Sweet as fuuuuuuuck. ^^

As students are picked off, the scientists seem to be triggering intricate systems that mark off people in a ritual. As later evidenced, the students are linked to character tropes in an ancient ritual to appease “The Old Ones.” Drug user is “The Fool;” Blonde bimbo is “The Whore;” and so on. This all ties up at the end, honest.

Four students dead and it is revealed that it doesn’t matter if “The Virgin” lives or dies, just as long as she is the last to meet her fate. All the scientists start celebrating the success of their labours when rumblings start occurring from below and a phonecall from the mysterious “Director” is received. Apparently something has gone wrong.

Turns out that “The Fool” wasn’t so foolish. His drugs had blocked the effects of the pheromones and personality altering effects and he has managed to survive an attack. He saves the virgin from her encroaching doom and they end up in the grave that the monsters crawled out of.

After fiddling around in the grave, it turns out to be an elevator. The two remaining students seem to be sussing this situation out and realise that it has to lead somewhere. That, and the alternative is going back into the woods to meet up with “Zombie Redneck Ritual Torture Family…”
As they descend into the facility, the film’s budget comes into perspective. It turns out that all monsters were at the facility’s command. All manner of monsters have been collected in one facility, purely kept to appease these “Old Ones.” This part of the film is truly awesome and leads into an unbelievable third act finale.

For whatever reason, security are sent to pick up the students and eliminate them. That doesn’t happen. Instead, the students release “The Army Of Nightmares” into the facility. It is a fantastic sequence and ends in utter bloodshed. The corridors are just red. [Similar to the third act of The Evil Dead ’13.] 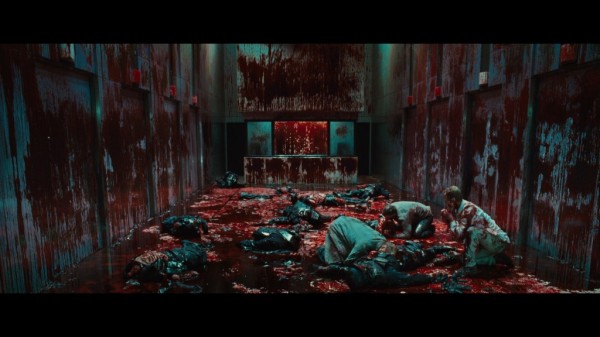 Anyway, for whatever reason, the two remaining students end up in the ritual chamber, piece it all together and then SIGOURNEY-ALIEN SLAYER-WEAVER turns up?! My jaw-dropped! She totally steals the scene and then takes an axe to the head.

As the remaining students state, as the world starts to crumble around them, “It sure would have been cool to see ‘The Old Ones…'”
Boom, giant hand bursts from the centre of the Earth and the film ends.

My description doesn’t really do the film justice and I made sure to keep it as concise as possible, while maintaining the majority of story elements. This film does a lot of things right. It has multiple plot twists, so much foreshadowing and a great number of surprises, which I have ruined. =]

The casting is really good, the character you actually care about survives and deserves to, to be fair. The surprise casting of Sigourney Weaver is perfect and, the consistently missed role of Chris Hemsworth is really good. Thats that God guy from Thor. Although he was a bit wooden in his big screen debut, he is completely different in this film and rocks “The Jock” perfectly. These two actors really do steal the scenes they are in, as far as I’m concerned. The real shining performance in the film though has to be from Fran Kranz. He plays the oblivious, yet esoteric drug user with such fantastic flamboyance that you want him to survive, just so you can see where he ends up next. Obviously, this is all in part to Joss Whedon’s writing, and as much as I’m sick of everyone worshipping his bum-hole, he has done a very good job of writing believe dialogue throughout and does craft a fantastic group dynamic.

As mentioned, the budget was clearly saved for The Army Of Nightmares. These are just fantastic and range from giant snakes to creepy child ballerinas, murderous clowns to circular-saw wielding robots, Unicorns to Mermen! Everything that was even slightly hinted at earlier makes an appearance and many, many more. Perfection. You get to see a huge number of monster destroy numerous security forces and make a ruddy good mess of it all.

I’d say that this film doesn’t make much of an impact, but it really does. It genuinely achieves everything it stated on the back of the box. It really is “a mind blowing horror film that turns the genre inside out.”

I whole-heartedly endorse this film and implore you all to watch it immediately, after suffering a sudden head blow to forget everything prior. =D

Honestly, the next review will be a bit more scathing. Positive reviews are boring, right?

Horror Hammer is written by Ellie and her head-based compadres. They don’t claim to be a good critic, but they needs to write something somewhere, so why not here?
All pictures are sourced from the internet and Ellie neither claims to own them, nor wants to own them.